Against Austerity Measures, the Weapon of Capital Accumulation 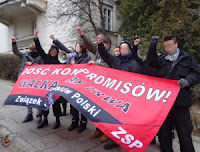 On Dec. 2, there was a picket at the Greek embassy in Warsaw against capitalist exploitation, austerity measures, repression and other attacks on working people in Greece. The protesters also the demanded release of prisoners. The ZSP distributed the following text:

We stand in solidarity with the people of Greece, fighting against the ploys of the ruling classes which are forcing more and more austerity measures on them. In Poland we hear the nonsense of neoliberal logic repeated again and again about how it is necessary to make cuts, as if the Greek working classes were living some life of waste and luxury. In reality, all the waste always comes from the top and it is the people who are made to pay for this. A few people get rich, while most working people get screwed.


A few facts about working life in Greece should dispel the myths of the neoliberals who try to convince people of their manipulations.
First is that in Greece, people work hard. They work on average 42 hours a week. But they do not earn much. 20% of Greek workers live in poverty and most earn less than 1000 euros a month. Pensions and salaries tend to range between 50-60% of the Eurozone average. Youth unemployment is very high. This shows something: that the neoliberal polices imposed on the country already after 1992 (Maastricht treaty), have not been working to create wealth and luxury for working people. The people have been working hard and have a rather miserable pay by European standards.
Another myth the neoliberals like to tell is that Greece is just poor and underdeveloped, so it cannot afford to keep its workers in such „luxury”. If Greece is so poor, how can one explain that the assets of its monetary financial institutions increased by 250% in the last decade? It is true that at the same time, public debt was increasing, which just shows that money was being accumulated in the financial institutions and cut from public spending, creating the debt through underfinancing.
In 2008, the Greek government paid banks 106,000,000,000 euros in aid. And this is the real reason that now they are looking to cut money everywhere – because they gave a huge bailout to financial institutions. So again, the government gave public money to financial institutions and force workers to pay for it twice: once by giving the money, second by being subjected to austerity measures.
At the same time that the working classes are suffering from cuts, Greek multimillionaires are prospering. There is record wealth held by Greek tycoons in Swiss banks (600,000,000,000 euros) and the Financial and Economic Crime Unit estimates that almost as much money is being moved around in suspicious off-shore companies with Greek capital. Apparently, there is a lot of money to be made in Greece or with Greek capital– and it is quickly taken out of the country and hidden.
Thus we refuse to believe the false excuses of the establishment, which is covering up the reality of what is going on.
The problem in Greece with austerity measures is one that is effecting countries around Europe. It effects Poland as well, except here so many people have fallen for the logic of the elites that the fight is out of people. People are running away from this country instead of fighting.
Let's stand up too and fight the austerity measures in this country: cuts in health care, education, public housing, higher costs put on people so the rich can get even richer.
March 31, 2012 there will be a Day of Rage against austerity measures in Warsaw. We invite people to take part in this event. For more information, follow the page of the ZSP: www.zsp.net.pl
Tighten your fists, not your belts!
Posted by Akai at 23:47