On Sunday, 16th June, Priama akcia expressed its support to the CNT (IWA-Spain) union in Aranjuez, which is in conflict with Esymo Metal. This company is closely connected to Gestamp, a company with a factory in Veľký Meder (70 km from Bratislava). CNT fights for reinstatement of its member who demanded better working conditions in a local Esymo Metal branch. On Tuesday, 18th June, another protest took place in the Alstom branch in Bratislava in support of the CNT-Zamora struggle against planned closure of four factories in Spain.


Esymo Metal / Gestamp / Edscha – Veľký Meder
Priama akcia joined international solidarity actions requested by CNT by putting up posters in the vicinity of Edscha (a company taken over by Gestamp a couple of months ago), informing about Esymo Metal practices. The aim of the campaign is to reinstate the CNT member and force the company to pay him an unpaid wage. The worker was fired after sending a burofax demanding basic safety tools such as a mask and a toxicity measurer. 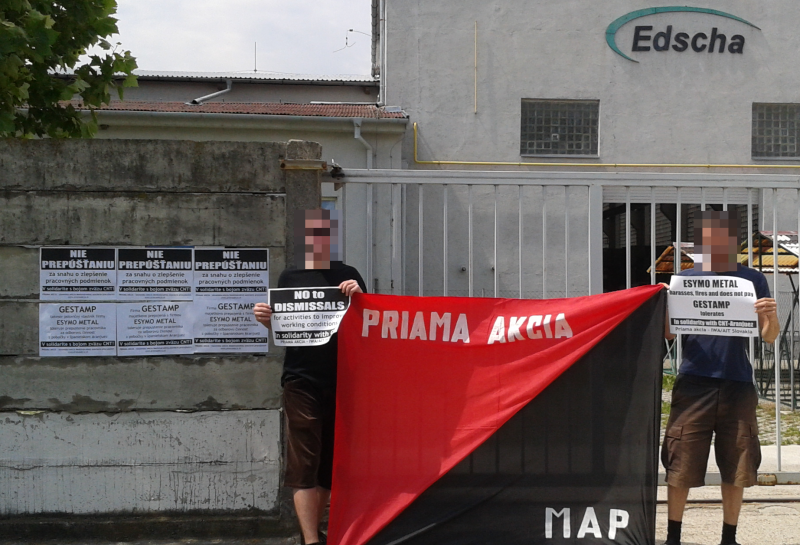 Alstom - Bratislava
This was the second time we visited the premises of the company. Although we did not meet with the management again, a protest letter against the factory closures in Spain and dismissals of almost 400 workers was given to the receptionist. Although it was a different person than the last time when we were there, she knew about the previous action and the conflict in Spain and promised to give the protest letter to the management. Also, we asked the company to answer the letter, since we have received no answer to the first protest letter.

You can support the struggle of CNT-Zamora against the closures by sending an e-mail via this e-form. For more info see: http://www.priamaakcia.sk/Protest-at-the-Slovak-branch-of-ALSTOM-in-Bratislava.html.