Protests have been taking place continuously against price increases. Mostly we have been riding the trams, buses and metro and giving out leaflets, calling for direct action. Today we gathered at the Centrum metro station. There people told about the different methods of direct action and called on people to act in solidarity with those not paying their fare in order to discourage the work of the ticket controllers. People spoke about social protests in other countries, including protests against transport fare increases which recently took place in Portugal. There was also an interesting discussion about the history of recent social movements in Poland, how the leaders of movements like Solidarity came into power and sold out and what lessons we can learn about the nature of politics and political power. 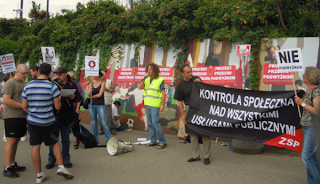 A couple of days ago, boxes with more than 151,000 signatures demanding a referendum on the price increases and the privatization of a utility were delivered to the City Hall. But their lawyers are now claiming that citizens cannot change anything that has already been decided by the City Council - although nothing in the Act on Local Referenda would suggest this. It is clear that they will try everything possible to block this initiative because most people would vote against the increases. For us this just shows the limitations of trying to act through the system to change anything, so ZSP calls for more social opposition and direct action.

Besides calling for direct action in the transport, we also called on a boycott of elections and more participation in social protest and self-organization instead.