On February 25-26, pickets took place in nearly 20 cities in Poland and Germany, protesting against bad working conditions and union repression in OBI.


The action campaign was started by ZSP in Poland at the beginning of the year at the request of a couple of comrades from OBI and some workers from several cities who started to network on the internet. The main reason the campaign was started were incidents of union repression in the store in Krakow. So far OBI has fired a unionist there, threatened another with dismissal and refused to renew the contract of a third. In Walbrzych a worker who spoke out against bad working conditions received a disciplinary warning. The news about the formation of a union in OBI, which had no unions since the pioneer union in the chain was repressed in 2001, got employees around the country talking about working conditions in the stores and what they could do about them. 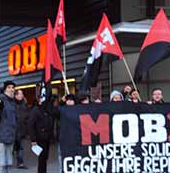 The comrades from FAU quickly offered support, noting that the company had a terrible reputation for union busting in Germany as well. As a result, there is worker representation in very few OBI stores in Germany.

FAU points out that OBI is owned by the Tengleman Group, which owns a few supermarket and hypermarket chains, including Kaiser's and Plus. The Emily case of a fired cashier was famous in Germany and FAU participated in solidarity pickets. They also organized solidarity actions at more than 70 Plus supermarkets in Germany in 2006 when that firm, which operates in many countries, fired a comrade from the CNT-AIT in Spain. Poor working conditions and repression of organized labour is common throughout this group. 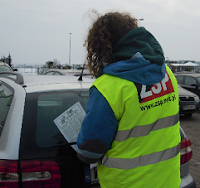 During the International Day of Action in solidarity with OBI workers, FAU and ZSP informed people of some of the demands of workers in Poland such as receiving a 125 euro raise, replacing old and dangerous equipment (esp. forklifts), improving health and safety measures, ending pay discrimination against women, stopping the repression of unionists and withdrawal of electronic salespeople. Workers, customers and passersby in both countries expressed their wide support of these actions.


On Feb. 25, a protest was held in Berlin. On the 26th there were protests in Warsaw, Wroclaw, Krakow, Katowice, Czestochowa, Dabrowa Gorniczna, Gorzow, Aachen, Kiel, Bonn, Freiburg, Halle, Hamburg, Solingen, Opladen, Hilden, Russelsheim and Recklinghausen. A few cities declared they would make actions in the next few days.