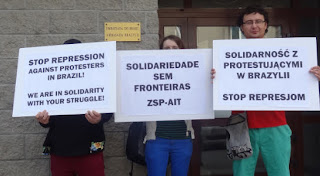 On July 1, members of ZSP and FEMEN made a solidarity action and protest in front of the Brazilian Embassy in Warsaw. With this action we wanted to show our solidarity to the protesters and also to respond to the call of our comrades from COB-AIT to protest the repression going on. Members of COB-AIT are amongst those facing charges for protesting.


In a letter to the Embassy, we demanded an end to the repressive and anti-social actions of the state. To local people we pointed out that the people in Brazil are doing what we failed to do - to get to the streets and fight against issues such as gentrification, high prices and squandering of public money.

Solidarity with those that are fighting!


We will go back to the Embassy with a bigger protest next week.
Posted by Akai at 19:03