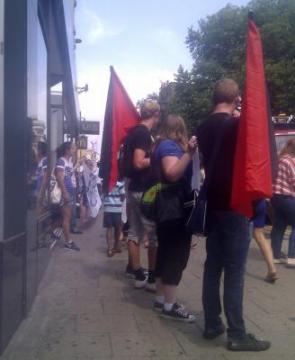 Members of North London SolFed were out in Hackney today with the ever-excellent Feminist Fightback to keep up the pressure on M&S over their non-payment of people doing jobs for the company as part of the Boycott Workfare week of action.

Given the boiling heat, an incredible effort was made by a samba band who turned up to lend a bit of noise and colour to the scene for most of an hour and we ran out of leaflets to hand out almost instantly. The public response was, as is usually the case when it comes to workfarer pickets, very supportive, with a number of people expressing their disgust at M&S's participation in it.

M&S has been claiming poverty recently after a bad year for clothes. However despite a fall in profits, the latest figures put them half a billion in the black. Paying all their current "work experience" people properly would be a drop in the ocean for the company, especially compared to the £829,000 paid to chief exec Marc Bolland this year for not actually doing the job he's paid for (ie. improving the firm's sales).
The callous exploitation of people who need to be paid for their work is constantly moaned about by MPs when it comes to middle class jobs like design work or journalism and that principle should apply to all work.  M&S and the rest of the exploiters grabbing free labour through benefit sanctions, that means you.
Posted by Akai at 07:16