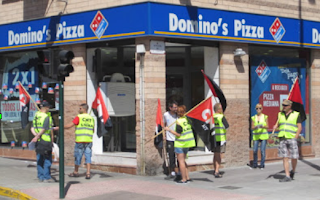 History of the Conflict

ASF Brisbane organized a meeting with Tim Van Schyndel, director of labour relations for Dominos in its Australia headquarters, demanding to regulate the question of the drivers salaries. But the meeting did not bring results. Then the ASF-B organized a picket at the headquarters, which was warmly received by local residents. They appealed to the ASF Melbourne for support and they unanimously decided to support their comrades and picket every weekend in front of Dominos, supporting the pickets in Brisbane.

The drivers had the following demands:
1) The basic wage should not be lower than the official minimum wage set by Fair Work Australia and casual and part-time employees should also be guaranteed this minimum
2) This norm should be observed irrespective of the collective agreement
3) Workers should be paid for training and meetings they have to attend (in the restaurant or on the Internet)
4) All tips from clients should go to the employees in their entirety and under no circumstances should Dominos take any part of them
5) All casual and part-time workers should be paid public holiday rates in ratio to those entitlements currently received by full-time, and part-time employees to the extent that by 2014, all casual workers including drivers be paid at the rate of double-time for all hours of work performed on public holidays.

Аrgentina. The Society of Resistance of FORA in Rosario translated and distributed the appeal of the Australian comrades.
Great Britain. The Solidarity Federation called for people to send solidarity protests through the firms page on Australian Facebook and on September 17 to flood the Australian office with protest faxes and letters of protest, so as to paralyze the company's communications for a while. SF organized protests in front of restaurants in London, Manchester, Leeds, Brighton, Bitterne Southhampton and other places. http://wessexsolidarity.wordpress.com/2012/09/15/solent-solfed-picket-dominos-southampton/ 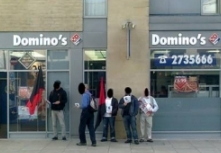 In Manchester, activists from SF from the city and West Yorkshire, together with members of the Anarchist Federation and other libertarian comrades picketed Dominos near the university. The manager called the police but they did not intervene. The action was successful: during the picket only one group of customers went in. 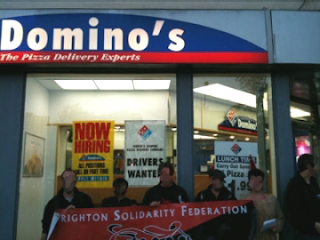 (http://www.solfed.org.uk/?q=manchester/dominos-solidarity-in-manchester) In Bristol, an Australian woman approached the picketers and thanked them for solidarity with Australian workers. She promised to inform about the action on local radio in Melbourne when she returned home. In New Cross members of South London SolFed delivered a protest letter to Dominos Pizza and spoke with the drivers there; the area was posted with leaflets and stickers supported the Brisbane drivers. A picket in Sheffield in front of Dominos was organized by the Industrial Workers of the World. Spain. There were different solidarity actions with the drivers of Dominos organized by members of the CNT-AIT in different cities. In Mataro, activists from Permia and Mataro held a picket at a restaurant on St. Antoni St. (http://www.cntpremia.blogspot.com.es/2012/09/concentracio-dominos-pizza-...) 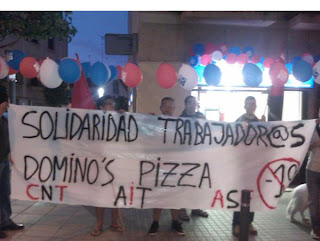 In Gijon, a banner was hung on one restaurant and different graffiti against the company was made.

In Cornelia de Llobregat there was a picket in front of Dominos when they have the most customers there. They read a communique a few times and gave out about 300 flyers to passersby, customers and workers. 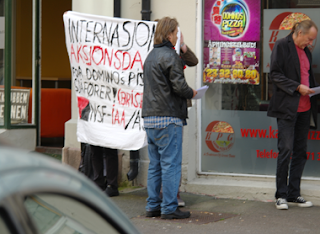 Poland. Members of the Union of Syndicalists, Poland visited the office of the company in Warsaw on September 14 and delivered a protest. On September 15, then hung banners on the restaurant on al. Jerozolimskie, which drew the attention of many passersby. They gave out leaflets explaining the struggle of the drivers from Dominos Pizza in Australia and about the situation of workers in the food service industry in Poland. The police and manager of the restaurant showed up. He made photographs of the picket to send in to the head office and tried to make an impression by offering the protesters pizza.
(http://cia.media.pl/miedzynarodowy_dzien_solidarnosci_z_kierowcami_domin...) Russia. For the international solidarity day, stickers were put up at the entrance of a Dominos restaurant reading „September 15, international day of solidarity with drivers from Dominos Pizza in Brisbane. Shame on the company that lowered wages by 19%! No to exploitation! International Workers Association". Leaflets with a similar text were left on cars, including the ones for delivering pizza.

Slovakia. Since it that country there are no Dominis, Priama akcia sent letters of protest to the company.

USA. Solidarity actions took place in San Francisco, Los Angeles, Berkeley, Long Beacg, Cleveland, Providence, Tampa, Ann Arbor, Atlanta, Minniapolis/ St. Paul and other cities. Most of them were attended by the Industrial Workers of the World (IWW), Workers' Solidarity Alliance and other local activists. Members of the Workers' Solidarity Alliance took active part in the campaign in San Francisco, Los Angeles, Berkeley, Long Beach and Providence (together with the group „Common Struggle”. In Missoula (Montana) there was a picket in front of Dominos organized by the Workers Solidarity Alliance and the Zootown Solidarity Network. In Ann Arbor the action was organized by Lansing Workers' Center. France. French anarcho-syndicalists held pickets in front of Dominos in Caen, Clermont-Ferrand, Paris, Toulouse and other places. Leaflets were distributed in 4 restaurants in the Paris region (in Nanterre, Besonne, Sartrouville and Enghien-les-Bains) entitled "Why the pizza delivers get only pennies” and they spoke with the workers. They discussed with workers about their conditions and what is happening in Australia. In Toulouse about 200 leaflets were given out in front of a Dominos restaurant and they spoke with the workers. (http://forum.anarchiste.free.fr/viewtopic.php?p=143682&sid=3b16170c7def917fa2ceb0a48a7ea7c1#p143682). In Caen there was a picket and leaflets were given to residents, customers and passersby. An administrator came out and demanded an explanation and declared that the situation in Australia does not concern him and that he would inform the management of the company in France. (http://cnt.ait.caen.free.fr/forum/viewtopic.php?f=2&t=6849)