Honk to Save Jobs! International Day of Action against Ford/Visteon 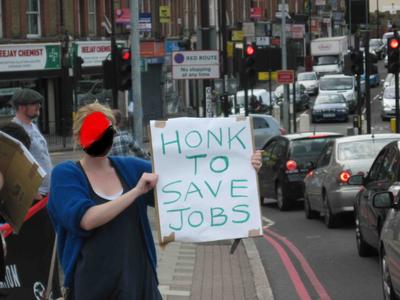 On Thursday the 18th of August, about 10 members from the London Locals of the Solidarity Federation met outside a Ford dealership in south London to demonstrate in solidarity with Spanish auto workers who are fighting the closure of their factory.
The workers, members of the anarcho-syndicalist Confederación Nacional del Trabajo, are fighting against not only an insulting redundancy offer, but to keep the factory open. While capitalism does not and cannot function to serve the needs of the working class, the still profitable Visteon factory (a subsidiary of Ford) remains fully capable of sustaining its existing workforce. The CNT has called management's negotiations a “pantomime” and recognises this as just another example in Ford's illustrious history of outsourcing, union-busting, and enforced casualisation of their labour force. To put pressure on company management, the CNT called for an international day of action against against Ford and SolFed was more than happy to answer the call.
The struggle is significant in another respect as well. In 2009 Ford made a decision to shut down three Visteon plants in the UK, with some workers being made redundant with only five minutes notice. Workers responded with a wave of factory occupations and despite an utter lack of support from their trade union, forced Ford to the negotiating table and secured a much-improved redundancy package.
The picket itself proved a resounding success. After speaking to the manager on duty about the situation in Spain, we set up for a two hour long picket. With our “Honk to Save Jobs” sign and two large red and black banners we sent a vocal and colourful message to Ford. Stationed alongside a traffic light, when cars honked in support we walked up and handed the driver a copy of a our Visteon leaflet and a the newest issue of Catalyst, SolFed's newspaper. One pedestrian in particular was so impressed by our effort that after chatting with us for five minutes, he later returned with a large bottle of water and cups for us all to share.
The message to Visteon is clear and simple: no job cuts and no factory closures. Heed the demands of your workers or we'll be back.
Want to know more? Please see the leaflet attached below.
Posted by Akai at 12:46