Deptford residents demonstrate against the social causes of the riots 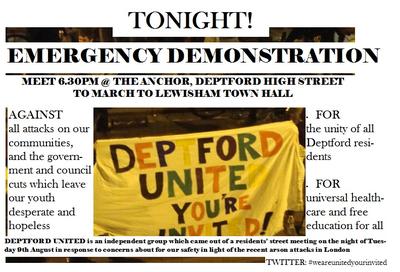 On Wednesday 10th August, around 200 Deptford and Lewisham residents were joined by a smattering of political activists for a demonstration in the name of DEPTFORD UNITY, against the social inequalities behind this week riots and disturbances across the country. The demonstration had been agreed by an impromptu neighbourhood assembly on Deptford High Street the night before, which had progressed from discussing fire safety to political and social problems within a matter of hours.

With a lot of tension and fear in the air, and with the EDL mobilising nearby in Eltham, it was an uphill battle for the assembly to convince their neighbours to join the demonstration. In the end, the weariness of Londoners was illustrated both by the legions of folk who sheepishly made their apologies, and by the march’s overtly ‘peaceful’ nature, confusedly talking about “discipline” while going through areas where there was abundant evidence of violent clashes between locals and cops.

The police presence on the demonstration was typically exaggerated, with police horses at the front and back and a large number of –all-white – cops pushing and barracking demonstrators. They also told Muslim youth who had gathered outside a mosque that it was a far-right march, despite the banners and chants of “BLAME THE GOVERNMENT, NOT OUR KIDS” and the number of non-white folk.

Even so, the march was joined by a number of passers-by, including a rollerblading crew, who were being gossiped about on Twitter as “a group of black youth on Smartphones”. South London Solidarity Federation made efforts to overcome the ethnic tensions and ignore the bigotry of some of the local Twitterati, distributing leaflets in which they talked about their sympathy with rioting youth, but calling on them to organise and focus their rage constructively in order to change their situation.

When the march arrived at Lewisham Town Hall, lipservice was paid to trade unions by the usual suspects, while a young black man and an Asian girl spoke about their experiences and the problems they encounter with the police and living in inner city London. Simultaneously, Channel 4 News and the Iranian Press TV hovered around, interviewing demonstrators.

In the end, the demonstration was a mitigated success. Not as many locals attended as was hoped, while the local left’s attempts to blame the riots on “the cuts” was shallow and ill-conceived. Clearly the motivations behind this week’s disturbances are more fundamental than the recent budget cuts, appearing to hint at whole lives of atomisation, disengagement and anger on our estates. The efforts of Deptford residents to talk to each other and collectivise their problems can only be positive. Together we can fight to improve our lives and our neighbourhoods.

More worryingly, racial tensions are once again rearing their ugly head, and SLSF stands in solidarity with the spontaneous demonstration of black men from Lewisham, who gathered a few hours later against the EDL, solely chanting “PEACEFUL PROTEST, WE’RE HERE TO PROTECT OUR COMMUNITIES”, only to be surrounded by more cops. Any attempts by the far-right – and the police, who tried to block supporters from joining them – to divide us along racial lines must be resisted by Lewisham residents of all colours.

Finally, with the state’s reaction now in full force, we must act to defend those accused of rioting and looting in the last week. This means mobilising in defence of politically-motivated council house evictions or benefit cuts, as well as distributing legal advice and offering solidarity to those facing charges.