Airport rooftop protest - the photos they don't want you to see

Below we reproduce some photographs of the rooftop protest held by John Foley at Liverpool John Lennon Airport. To avoid embarassment to the airport and Ryanair, the police placed a news blackout on the protest, meaning the local media were unable to report the story. As a result, Solidarity Federation was the only organisation publicising the action against Ryanair's exploitation of young cabin crew recruits. 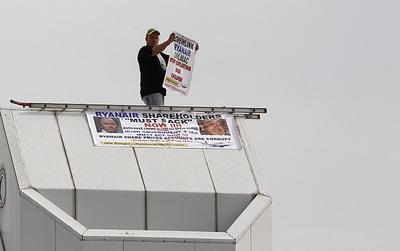