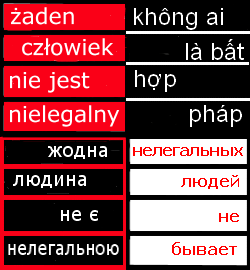 On Oct. 22 there will be a picket in front of the Sejm in Warsaw organized by immigrants concerning abolition for people in Poland without legal status. On the same day, our comrades from Priama Dija will organize a picket at the Polish Embassy in Kiev.
Statement of ZSP on abolition for immigrants without regulated status in Poland
ZSP demands immediate abolition for all people called "illegal" on the territory of the so-called "Republic of Poland" without the permission of the state.
The very existence of categories such as "illegal immigrants" or "illegal workers" condemn people to a life and work in the black economy where exploitation and other forms of abuse are dominant. Such people, who just want to survive and find a place to live are thus criminalized. In reality, the system in itself is criminal. It maintains illegal working conditions and strengthens mafia structures which have enormous financial profit from the existence of "illegal" immigration.

We deem all state borders to be artificial and all governments to be usurpers . Nobody has the right to divide people into legal and illegal.

Workers of the world are divided by borders and governments, but we have a common interest. In our world, capital has opened the way for freedom of movement for itself. For business, the world has no borders. But this same system, rigged for the benefit of the exploiting class, works to the detriment of workers, who are denied this same right of free movement and right to chose where they want to work. It's our common interest that the world be open for people, not for business and that the world become a place where people are not forced to live in poverty - the poverty which is created by global capital and domination.