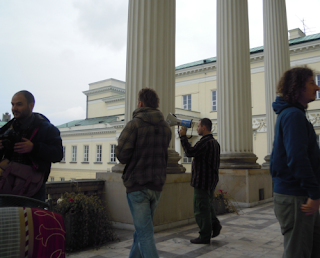 Today members of ZSP and some tenants activists decided to pay an unexpected visit to the President of Warsaw in City Hall. We announced we were there to see the President and took over the meeting room. A banner was hung on the balcony of the City Hall and stayed there until the end of the day. As soon as we decided to speak from the bullhorn from the office, Vice President Jakubiak showed up. We have many long-standing disputes with Jakubiak and the two main tenants organizations, KOL and WSL tried to recall him. We decided to amuse ourselves and sat down to a meeting with him. The Tenants' Defense Committee presented 20 postulates which we would like to be implemented and demanded that he answer each one. The meeting was filmed and went out on the radio.

Once again the city showed its true face and the anti-social policies of the administration were exposed.
We reminded the city that we still want to talk to the President and will find her sooner or later - after all, we know where she lives. After some time we decided to leave the City Hall since tomorrow we will confront the city bureaucrats again.

A few photos and videos (in Polish) are on the ZSP Warsaw blog:
http://zspwawa.blogspot.com/2010/10/city-hall-occupation-of-presidents.html
Posted by Akai at 19:15