March on March 31 - Capitalism is Cannibalism! On March 31, we marched in Warsaw against various anti-social nightmares created by the capitalist disease. Despite the mixture of rain, hail and snow throughout the day, and despite rumours in the papers that we'd start a riot and occupy key government offices, which scared away some of the people, a few hundred people marched through the city, stopping at various locations to talk about problems such as eviction, reprivatization of buildings, militarism, the high cost of education, poor working conditions, anti-union repression, corruption in the government and the role of the police, etc. etc. etc. Chanting slogans such as "throw out the government" and "the city is for people, not for profit", the demonstrators started off under the King's Palace and headed down the most expensive street in Warsaw. Since the demo was called by the ZSP and Tenant's Defense Committee, and since the government made it easier to evict people starting the day of the demo, many speeches and slogans about evictions were made. People carried potraits of the "Queen of the Slums" (a reference to the President of Warsaw) and shouted "off with her head". 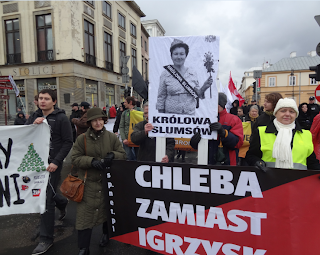 Queen of the slums. Banner says "  Bread not Games", a reference to the huge amount of money spend on building stadiums for the Euro 2012.


Different issues came up if something appeared in the streets. Next to the starting point, there was a huge banner advertising a conference on shale gas, so issues such as this and even GMOs were mentioned. 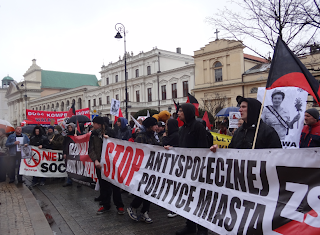 In front of Mossakowski's place.

The first stop was under a house managed by the infamous slumlord Mossakowski, most famous for being the landlord of the murdered tenant activist Jolanta Brzeska. This house, along with another about 100 meters away, has been empty for a long time since the tenants were harrassed and then kicked out. The demonstrators pointed out the effects of this real estate speculation, that on the most famous and expensive street in the heart of Warsaw, there are dozens of vacant buildings, just gathering our posters. (Hopefully this somehow brings down the value of the real estate.) 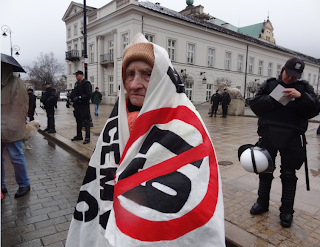 The government is raising the retirement age to 67.


Next stop was the presidential palace, where lots of noise was made and anti-government slogans chanted. After the palace, we made our way to the University. There our comrade spoke about her difficulties with surviving her studies, since she has to work in crap jobs and cannot afford the rents. Activists pointed out the class implications of the commercialization of eduction and that the experience of our comrade was unfortunately much too typical.

After speaking about working conditions of students, there were lots of slogans about workers' rights. When we got to the next corner, we stopped at the Brave New World Bar, where we had picketed about the use of trash contracts last year. (Apparently, after much bad publicity, they have stopped this practice.) People told this story yelling that temporary work is permanent exploitations and that we want work contracts without any manipulations. (A reference to the fact that many employers in gastronomy manipulate and give the wrong type of contract illegally.) Next we stopped in front of Starbucks, where there was more talk about working conditions and about the anti-union activity of the firm against the IWW and the strike in Chile. 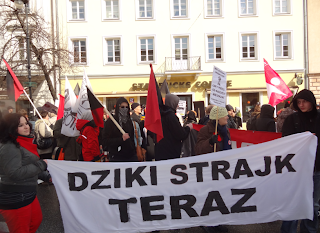 Further down the street we mentioned several things, like the illegal reprivatization of one building or the working conditions in the bookshop chain on the corner, where ZSP is beginning to take action against various violations of workers rights.

Passing some buildings connected with banks and the economy, and approaching the Ministry of Economy, people started chanting that the end is approaching for the bankers and the bourgeoisie. There were different speakers talking about the economic crisis, the effects of the government's policies and other matters.

Next we headed towards the American Embassy where people complained about US policy and some Americans on the march started yelling "General strike! May Day is ours!" In reference to the monument to Ronald Reagan near the embassy, our comrade pointed out that he was not the "liberator from communism" that he is made out to be in Polish history, but rather an enslaver to neoliberal ideology. 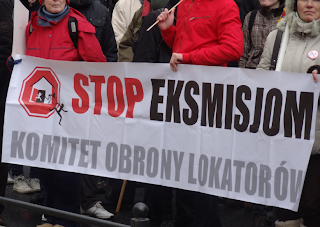 Next there were some hard condemnations at the Ministry of (In) Justice. Housing activists pointed out the role of this institution and of the police in helping to carry out illegal evictions. The police in general were criticized, as were the courts, who usually bend over backwards to find weird interpretations of the law to help maintain the lawlessness of property reprivatization and mass evictions.

Passing by the statue of the fascist idol Roman Dmowski, we were surprised to see that it was in fact the single most protected object along the route - much more than the Presidential Palace, the American Embassy or the Prime Minister's Office. People pointed out that we are against his nationalist ideology and that nationalism is used to keep the working class divided. We also pointed out that both traditionally and presently, several Polish extreme-right groups support the elites in various ways. And it could be mentioned that they organized the week before a demo under the same name as ours, trying to confuse people. The initiative to do that was made by a right-wing activist who also is a scummy landlord. 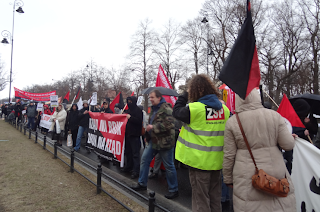 Finally we ended at the Prime Minister's Office, where we let out with a general criticism of the neoliberal government.

With a hailstorm starting to hit us, we ended the demo but reminded people that demos are not enough and that they need to organize everyday. We also thanked people from other organizations who joined us: the Warsaw Tenants' Association, the Anarchist Federation and a couple of individuals from the Indignants and Young Socialists (the normal faction :-)).

The demonstration was part of IWA action days and also coincided with other international protests against capitalism. It also occured on the 5th anniversary of the founding of the ZSP.