Holland and Barrett Picket in Halifax 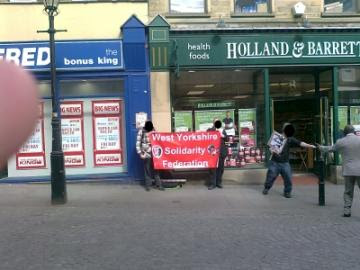 Members of West Yorkshire Solidarity Federation were joined by Huddersfield Anarchists to picket Holland and Barrett in Halifax today as part the anti workfare campaign in conjunction with the IWA days of action.
We were met with a good response overall and gave out 250 leaflets. H&B had a member of staff on the door to "welcome shoppers" which shows they were worried we'd have an impact.

One person who we gave a leaflet to took it to the local Job Centre and handed it round. It apparently went down well. Other feedback included an ex member of staff at H&B who stated that they were a rubbish employer and leaving was the best thing she'd ever done.

This isn't the end, we will continue to hold pickets at various H&B branches (as well as other slave labour companies ) until they stop using unpaid slave labour.

www.solfed.org.uk
Posted by Unknown at 09:01