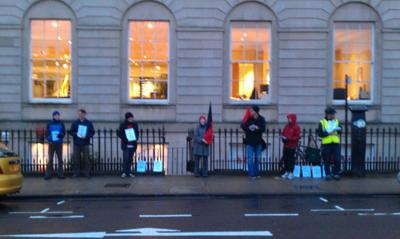 Red and black flags waved as a dozen people from the Anarchist Federation, Industrial Workers of the World, the Scottish Socialist Party, the Solidarity Federation and other individuals took part in a picket of the Glasgow premises of Adecco for one hour between 4 and 5pm on Friday 20th January.

A couple of hundred leaflets were handed out to curious passers-by explaining how Adecco are supplying strike breakers to replace workers on an indefinite strike at the ABB Factory in Cordoba Spain that has been going on since November 28th. We also explained how the lower wages and job insecurity encouraged by employment agencies like Adecco worsens conditions for all workers.  One member of Adecco's staff came out and laughed when we told her why we were there and then had her fag break. 2 other members of staff came out to ask what we were doing and took the leaflet. One falsely claimed that we weren't making it clear that the Adecco strike breaking was in Spain to try to disassociate their office from the dispute. However he did accept they were part of the same company. Placards clearly stated the demands of the strikers in Spain – equal pay for all workers at the ABB Factory in Cordoba, respect for all ABB and Adecco subcontracted workers, a safe workplace for all workers, ABB and Adecco should talk to the strikers, Adecco should stop providing scabs for strike breaking, sacked strikers should be re-instated by ABB and Adecco, collective bargaining rights and job security for all workers. Another placard in Spanish, based on a banner by the strikers union, the National Confederation of Labour (CNT) called for the defence of all jobs.

A postman calling at neighbouring offices stopped to say even though he wasn't going to Adecco he wouldn't cross a picket line even if it was one man and a dog. He was a Communications Workers Union rep who also trains people in other unions. He took our leaflets to put up on noticeboards at the main Glasgow sorting office in Glasgow, in Springburn. He will also be giving them to Union of Shop, Distributive and Allied Workers (USDAW) members he is currently training through Union Learn at the Tesco Extra in Springburn. A passing teacher also stopped to voice his support. He had been out on November 30th.
Pickets also took place in Brighton, Bristol and London. A letter of protest was also handed in to the UK Headquarters of ABB in Warrington by Manchester Solidarity Federartion. Since November 28th there have been numerous solidarity pickets around Spain and one as far away as Chile.

Updates on the strike at
http://www.cnt.es/