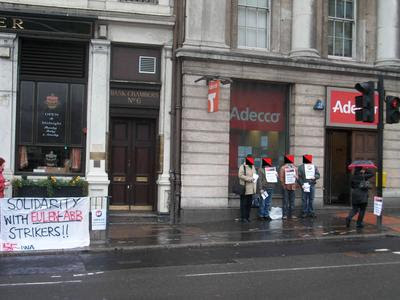 In solidarity with the sacked workers of EULEN-ABB in Spain, London locals of SolFed like our comrades in Brighton, took the streets today with a picket in front of Adecco’s London Bridge office. After a strike going on since last November, the Spanish employment agency EULEN fired all of the workers in the local strike committee, for the benefit of its contractor ABB. A global agency firm Adecco, a majority owner of numerous other brands in the industry, moved in supplying temp workers to scab the site -An attack against workers rights and an initiation rite for ABBs new program of union busting and a contract with Adecco’s local branch, EUROCEN.

Having already developed a history with Adecco’s other branch, the British Office Angels, defeated by direct action in a wage dispute last year by SolFed; we will continue our fight against Adecco’s casualisation racketeering, in solidarity with our Spanish comrades.

Today’s picket was manned at the front of Adecco’s office through the whole work day by members of SolFed and other comrades. While distributing information material for the public about the ongoing struggle, we gathered especial interest from Adecco’s perspective clients visiting the office. Through the dispossessed nature of temp working, Adecco thrives on its workers low bargaining position and lack of common organization; don’t get cheated out of your wages, don’t get cheated into scabbing, know your right and what you sign on!