Action against Shady Temp Agency and Campaign with Building Workers 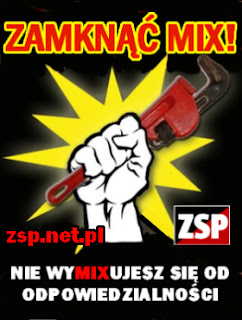 Karol M. has been in a coma since November 3. That's when he had an accident at his construction job in Warsaw. To the horror of his family, it turned out that Karol was never given any contract by the work agency "Jerzy Madziarowicz MIX". The boss did not report the accident at work and went he was called by the police, he claimed that Karol did not work for him.

Karol has no insurance. He may never be able to work again. And Madziarowicz is trying to avoid responsibility. ZSP has started an action against the agency. The first step was to try to collect evidence that the agency is functioning and hiring people, with or without contracts. Now there is the task, which is not easy in Poland, of getting compensation for Karol.

Madziarowicz can expect a visit from us and should understand that we have been speaking to other people who have worked for him.

In the meanwhile, we began an information campaign to warn other workers about this shady agency. Not only the way they hire people for shitty construction jobs, but also a lack of safety, working on building sites which don't conform to standards and procedures, late payments ...
Besides this, once again we bring up the topic of illegal work and workers rights. This time in particular we would like to point out basic information about health and safety. Even when this is a small site or there are few people employed there, the bosses still have clear obligations. In addition, if serious accidents occur, certain procedures have to be followed and the accident has to be declared to the authorities.

Many workers are confused about their rights, especially on small sites or when they work for subcontractors, agencies or on mandate contracts. Then the bosses usually all try to claim that somebody else is responsible, or they have no responsibility at all. We have published some articles and leaflets explaining what rights workers have and what they should do if they encounter problems.
Posted by Akai at 22:30