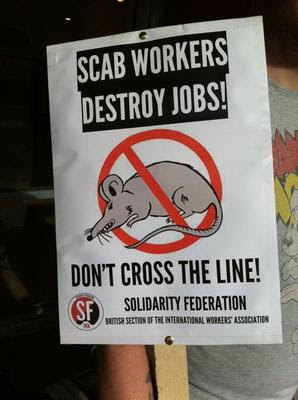 As around 750,000 public sector workers took strike action, Liverpool Solidarity Federation offered our support to picket lines around Bootle as well as joining a march and rally in the City Centre. We found that strike action was strongly supported, not just by the staff walking out but by the broader constituency of those affected by and fighting the cuts.

Members of Liverpool SolFed, including one who is a public sector worker themselves, embarked upon a "whistle-stop tour" of pickets in Bootle, which has a high concentration of government workers. Everywhere we went, these were reports of very few people crossing picket lines. Particularly notable was a Health and Safety Executive building where, despite the Prospect union being bigger than PCS, less than 20% turned up for work. Spirits were high all around, and support from the public was overwhelming. Cars even honked their horns when they passed the small rabble of flag-waving anarchists moving between picket lines!

In Liverpool, striking staff at Liverpool Museums had put on a banner-making workshop for children and parents taking part in the lunchtime march and rally. By the time we arrived at St George's Hall, a number of hand-painted signs were on display alongside the various trade union banners and placards.

The march came together quite smoothly and it quickly became evident that there was a big turnout. Far bigger, in fact, than on May Day or at any of the previous anti-cuts marches organised by Merseyside Trades Council. This will have largely been because of the strike itself drawing people in, but it also remains a fact that Trades Council activity is extremely insular and inward-looking, whilst the build-up for June 30 has explicitly emphasised broad-based activity and "generalising" the strikes.

The march finished off in Chinatown, where the open park setting gave us the first real glimpse of how big the demonstration was. People milled here for several minutes, and we distributed most of our copies of the latest Catalyst, before calls were made to head to an indoor rally. As only a tenth of the people present could fit inside, most of the crowd soon dispersed, many heading off to nearby pubs.

Joined by members of Liverpool Uncut, we headed back to Bootle to round off the day. Whilst most of the picket lines were long over, staff at one building were still holding the line due to the presence of an evening shift. We joined them for the last hour-and-a-half, up to 5.30pm, to see but 5 people enter the building. This meant that the total number working - including non-unionised cleaning staff, senior managers, and members of the Arc union who hadn't been balloted to strike - numbered less than 35. Particularly heartening was seeing a member of staff who had started work only that Monday agree to head home once he knew he was under no obligation to break the strike. He headed home to cheers from everyone present.

Overall, the day was an incredibly positive one. Spirits were high, support was strong, and the march and rally were extremely lively. For many people, it is bound to have been a morale booster.

It goes without saying that this single strike won't break the government. Certainly, the movement to generalise the struggle needs to expand. It has to go beyond the remit of the union leadership, whose goal remains to bring the government back to the table over pensions, and build a social struggle against austerity as a whole and ultimately against capitalism itself.

But, for all its limitations, June 30 demonstrated that the will for such a fight exists. It only needs to be tapped into, by offering people confidence in their own strength as a class and making the case that the issues we face really do boil down to the balance of class power.

You can view more photos of the day here.