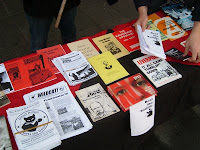 As well as handing out copies of our No War but Class War leaflet, we also gave out our new Beat the Bailiffs advice pamphlet.

The conversations we have with members of the public suggest that libertarian anti-capitalist and anti-state sentiments are widespread, but anarchism isn’t always seen as a viable alternative to the status quo. We aim to try and change that.

Currently our Local has members in Kirkby, Toxteth, Walton, Aigburth and Waterloo, with sympathisers in other parts of Merseyside. Unlike many revolutionary groups, we don’t want to recruit-at-all-costs just for the sake of it. However we do aim to grow as an organisation, recruiting those along the way who agree with anarcho-syndicalist theory and the aims and principles of our organisation. If you think that includes you, get in touch!

Email us: liversf@solfed.org.uk
Posted by Akai at 22:57