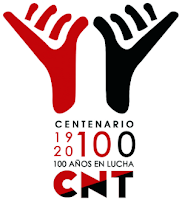 CNT, 100 years of anarchosyndicalism (1910-2010)
On November 1 1910, the CNT ( Confederación Nacional del Trabajo, or National Confederation of Labour) was established at the premises of the Circle of Fine Arts in Barcelona. This organization, heir to the First International in the region of Spain (1870), was born of the labor movement itself as the first independent trade union organization in this country.

Assuming the internationalist slogan "the emancipation of the workers shall be the task of the workers themselves or it won't be at all", the CNT became the repository of popular rebellion, which, like an undercurrent, opposed to power throught history to emerge triumphant at specific times from the Middle Kingdom of Egypt to the French Revolution, was the origin of the unique historical processes that humanity advanced along the path of freedom, justice, equality, dignity and progress.
The CNT began its anarchosyndicalist activity on the simple agreement to create a workers' organization independent of the politcial, religious and economic powers as a prerequisite to improve the living conditions of the workers until exploitation is ended. In a few years it had brought the majority of the labour movement together, achieving significant social and economic victories which are an invaluable legacy to society. The eight-hour work day, the 36-hour working week, the eradication of child labour, women's equality and the incorporation into daily life of values which are in vogue today such as solidarity, federalism, ecology, feminism, free love, antimilitarism and ateism ... this is part of a legacy which reached its peak during the Social Revolution of 1936 when utopia - libertarian communism - became a way of life in all the liberated territories.

The reaction of international capitalism allowed Franco's fascist army to turn this revolutionary dream into a nightmare of hundreds of thousands of people persecuted, assassinated and disappeared after the victory of the coup in 1939. But not one of the culprits - all of them known, some active politicians - from this regime of terror, one of the most criminal regimes in history, was even publically condemned, due to the shameless impunity pact that the national democatic left (the PSOE, PCE, UGT and CCOO) made with Francism, sealed in their agreements of capitulation to capital, known as "the Spanish Transition" (1977).

Nevertheless, the people continued to defend, often with their lives, the simple principles of anarchosyndicalism: independence, autonomy, federalism, self-management, assembly, solidarity and direct action - that is self-organization to reject any interference on the part of political parties or other economic or religious institions in labour matters. Strikes, demonstrations, repression and torture were the daily chronicles of the dictatorship (1939-1976), until it disappeared and the workers' movement returned to enthusiastically reconstruct the CNT it had longed for (1977). We lived through years of constant labour victories. The mass events of Montjuich and San Sebastián de los Reyes, marked the powerful rebirth of the Confederation in the 70s.

The progress of the labour movement, again self-organized by the CNT, through such exemplary struggles such as the gas station strike in 1978, prompted the reaction of capitalism, this time supported by the democratic state and its instutional apparati (governments, parties, judges, trade union bureaucracies...). The success of the CNT as a union was repressed by the police (the Scala Case in 1978) and together with campaigns of silence and defamatory proganda in the media, this has had distastrous consequences for the workers' movement in this country.

The weakening of the anarchosyndicalist presence in the labour movement made possible the loss of rights acquired though a long and hard union struggle, through the deregulation and casualization of labour imposed with the worst of the corruption plaguing the country: trade union corruption. This is a silent, official corruption which perverts unionism in general in the eyes of the workers, but which is carried out fundamentally by the institionalized unions - the CC.OO and the UGT, whose union "yuppies" receive subsidies and millions from the governments and companies that pay for their treason, pay so that they accept measures adopted in defense of capital and its increased accumulation of benefits (labour force adjustment plans, labour reforms, the right to fire at will...)

Despite all this, thousands of workers continue today in this genuine workers organization that we call the CNT, maintained exclusively by our own means, thus making it the only living example of class unionism, capable of confronting oppression and social control, the ecological destruction of the planet, all aspects inherent in capitalism.

2010 has a special connotation for us: it marks a century of the existence of the CNT. It is the centenary of the people and the invaluable struggle of thousands, who over these 100 years have been endowed with an exemplary tool, which the working class around the world may follow, with its own culture, self-organizing capacity, radical struggle popular extension and revolutionary achievements in order to build and anti-authority and solidary society.

These ideals form the noble cause which we invite you to join here and now.
www.cnt.es