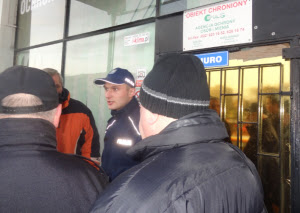 On December 19, a couple of former employees of the Impuls agency went to demand payments they were owed. The company has not been paying workers, who sometimes have to wait even 6 months for their salaries - if they get them at all. ZSP has made numerous actions at the company, which have led to some payments being made. (See here:http://www.zsp.net.pl/action-impuls-payments-made-struggle-not-over)


Again we went supported by a few people from Sierpien 80 union, only this time, we found that the office was locked. Either they knew we were coming or somehow predicted this and decided not to let anybody without an appointment in. Arriving at the locked office, we started to scream to them to let us in, saying that we would not leave and that this would not stop us from coming back.
One of the representatives of the firm in the office refused to come out and talk to us. Another one arrived and played dumb. Despite the fact that we had spoken to him on numerous occasions, including the last action (where some workers got paid), he pretended not to know who we were, why we were there and again started his idiotic denial that there were any problems.
One of the workers present had quit after not being paid for some time. Now the company claims that this is a reason to not pay him, because he "breached his contract". Although it is clear that the company breached its contract first. At the action, the representative went one step further, claiming he had been fired for disciplinary reasons. No such firing had taken place.
The company called the police which, although polite, displayed their ignorance of labor law. They were advising workers how to solve their problems through the State Labor Inspectorate, no doubt completely unaware of their lack of competency.
After about an hour and an half, towards the end of their working day, we decided to leave and come back with a larger crowd later. Shortly after the action began, we learned that the company's lawyer was frantically contacting one of the people from ZSP about the action. Later on, we received a letter which confirmed that they sent money to one of the workers - only not the entire amount owed.
We do not understand why this company wants us to keep coming back to them, but since they did not pay everything they owed to everybody, we will have to do that. In the meanwhile, it looks like time for a strike.
Posted by Akai at 20:23