Day of Action Against Workfare 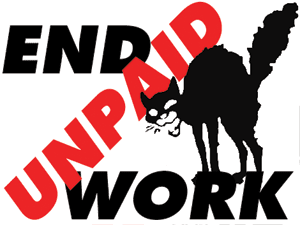 What is workfare?
Unemployed people being forced to work for free for up to 6 months with no guarantee of a job afterwards, many of them for major high street companies.

Does workfare help the unemployed?
The government’s own research found that in countries that introduced workfare it could actually lower a jobseeker’s chances of finding a job. Where previously these roles would have been filled by paid staff, employers get to take advantage of a growing pool of jobseekers they won’t have to pay.

What if I have a job already?
Workfare means employers can lay-off their staff and replace them with people they don’t have to pay. The point of workfare is to drive down wages and working conditions, undermining even the minimum wage which many struggle to survive on.

Workfare isn’t about saving money – in fact these schemes are hugely expensive to the government. Workfare is a massive subsidy to private companies: providing them with free labour at public expense. The

subsidy to private companies: providing them with free labour at public expense. The government has long been subsidising companies that pay low wages by topping-up poverty pay with benefits and tax credits. Workfare means less pay for us and more profits for them.

The state and businesses are colluding to undermine all our conditions. We say: END UNPAID WORK.
www.solfed.org.uk