Solidarity with Library Workers! For the Reinstatement of Dismissed CNT Activists to the National Library in Madrid! 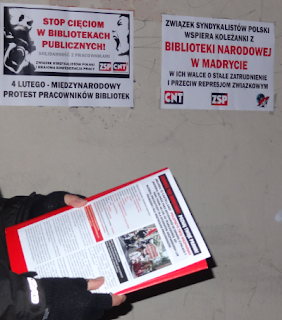 On February 3-4, ZSP Warsaw is holding informational actions in solidarity with library workers struggling against budget cuts and other measures which negatively affect both their working conditions and the quality of the libraries.

Library workers in Spain, inspired by the Save our Libraries Day protests in Great Britain, decided this year to protest. The CNT union in the National Library of Spain asked for international solidarity. It has been in a conflict with the National Library because of its use of outsourced workers instead of permanent staff and because of repressions and firings made by the library against its activists.

The union points out that the use of outsourced labour is not cheap, but is done to be able to dismiss staff more easily and to channel public funds to private businesses - to the company that act as intermediaries for the staff. One of the dismissed unionists explained that she earned about 19,000 euros per year while 54,000 euros per year were being paid to the intermediary company. This made her employment even more expensive than direct employment, so they are wasting public funds while claiming budget cuts are necessary and the workers are getting a raw deal. The CNT is fighting for the direct employment of the workers and for the reinstatement of their comrades.

ZSP produced different material for the informational actions. The first was a bilingual text for use in Spanish lessons in schools and universities. The material explained about this conflict and also the strike of the ABB workers, examining the labour issues involved and informing that the ZSP in Poland is also campaigning against the abuses of temporary work or outsourcing. Posters went up in different places and also ZSP gave the text out as leaflets to other students, such as the language students at the Cervantes Institute, which is run by the government of Spain to teach Spanish in other countries. The material was also taken by other teachers who might use it for discussion in their classes as well.

ZSP also made leaflets for library workers which mentioned the problem of the Spanish comrades and placed it in an international context, concentrating on local problems related to budget cuts and labour conditions. We invite all those affected by such policies to demonstrate with us on March 31 when we will protest, among other things, the cuts and the anti-social policies of the government.
Posted by Akai at 09:32