Моscow: Picket at the Representative Office of ADECCO 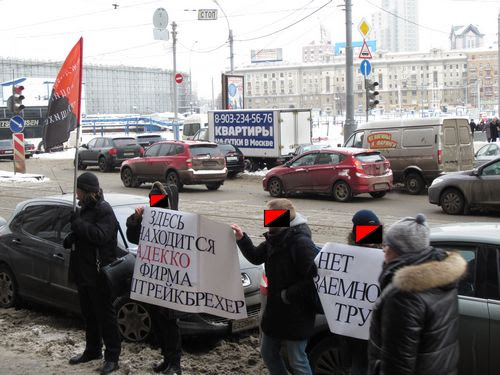 On Feburary 17 there was a solidarity picket with the workers of EULEN-ABB from the anarchosyndicalist union CNT-AIT in front of the business center in Moscow where the representative office of ADECCO is located.

The workers of the ABB factory have been on an indefinite strike since November 28, 2011, demanding that the conditions of the proper collective agreement be applied and the subsequent pay rise be given, as well as an improvement of working conditions. The bosses ignored the demands of the workers and they were all fired. ADECCO supplied new workers who acted as strikebreakers.


Members of the Russian section of the IWA came to express their solidarity with the comrades from the CNT. The picket lasted from 14:00 – 15:00. The authorities only allowed 5 people to protest, claiming that the sidewalk in front of the building was too narrow. The picketers held placards with their opinions about Adecco and their practices.

The picket went without incidents although at first the security of the office building tried to pick a fight.


Leaflets were given to passersby and workers of the office center explaining the reason for the action. Many people took them with interest and asked what a „strikebreaker” was.


Below is the text of the leaflet:


SHAME ON ADECCO – STRIKEBREAKER COMPANY
Since November 28, 2011, the workers of the ABB factory in Cordoba, working through the subcontracting firm EULEN, have been on an indefinite strike, demanding that the conditions of the proper collective agreement be applied, they receive pay rises and that working conditions be improved. The bosses refused to listen to the workers – instead they fired them all and hired new ones through the international work agency ADECCO. Thus ACECCO entered into this conflict in the shameful role of strikebreaker.
On February 17, 2012 on the call of the International Workers' Assoication, there is an international day of solidarity with the striking workers of EULEN-ABB and protest against the strikebreaking of ADECCO. Hands off our comrades in Spain!
Russian Section of the IWA
http://www.aitrus.info