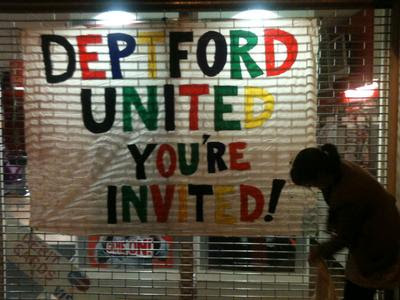 On the night of 9th August, Deptford residents held a street meeting to congregate in a peaceful fashion in order to meet each other and reclaim our streets from the fear and misinformation being spread about the riots. It was called by local Solfed members that day after discussions with neighbours over concerns of residential fires. The previous night had seen several shops and bookies smashed in and looted on the high street.

At 6pm a group of 30 residents met and decided to reconvene at 8.30pm with an aim to prevent and put out any potential fires and discuss the events of the last few days. This was not a reactionary vigilantism but a considered act of solidarity and grass roots initiative.

In the night, 100 people came out to support each other and talk. A banner was made to show others what we were about and speeches were given. Many people spoke of the problems that young people and the whole working class is facing and the need to act collectively to make changes. Out of the discussion came a decision to hold an emergency demonstration the next day against the cuts and to highlight some of the causes behind the riots.

www.solfed.org.uk
Posted by Unknown at 20:55