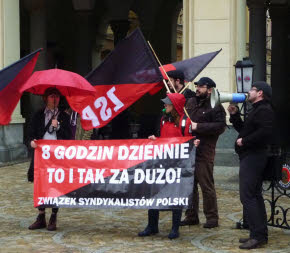 On June 25 a protest was held in Wroclaw against the changes to the Labor Code which effectively eliminate the 8-hour working day and introduce a number of negative provisions. The protest started at the Vojevodship office and marched to the headquarters of the Civil Platform ruling party. Besides protesting against these changes, people spoke out against other problems of workers, such as the problems of precarity and the problems of the unemployed. There was also criticism of government plans to deny benefits to unemployed people who do not accept any job offered to them.

This demonstration is part of a series of protests organized and planned by the ZSP in reaction to the newly adopted changes. Members of "Tenants Action" also supported the protest.
Posted by Akai at 22:48