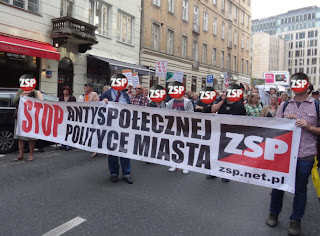 On June 3, ZSP Education Workers took part in a demonstration in defence of public education in Warsaw. This is part of ongoing protests against budget cuts in education and against mass dismissals of teachers.

Throughout Poland, around 15,000 teachers will be fired this year. Hundreds of schools have been closed in the last 1-2 years and some institutions lost their status as educational institutions, meaning the workers are no longer protected with the same rights as other teachers. Some other educational workers are seeing a dramatic increase in their working hours, some teachers' bonuses and benefits have been cut, etc. etc.

Despite this, the mainstream unions are not only not mobilizing, but are discouraging protest by teachers.
ZSP calls for an activization of the workers from outside these unions and against the control of their bureaucracies.

The march was attended by some leftists from one mainstream union, leftists from some alternative union, some other left activists and a few parents who are fighting the cuts.
Posted by Akai at 12:35