Katowice: Picket against the end of the 8-hour day 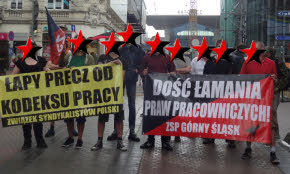 On June 22 ZSP organized a picket in Katowice to protest against the changes in the Labor Code and Act on Trade Unions which effectively eliminate the guaranteed 8-hour work day. Speeches were made informing people of what the changes in the Labour Code actually mean and many leaflets were distributed, with many people stopping to talk and show their support.

During the picket, some told about the situation in their branches. A psychologist spoke about some of the difficulties some workers in that profession are having and a miner said that it shows how widespread the problems are and that they touch all sorts of workers, not just in areas like production or physical work. A construction worker who was passing by also wanted to speak and find out if any comrades worked in his branch. The picket attracted the attention of a wide range of people.

Despite the rain on and off, the picket lasted a couple of hours and came in contact with a lot of people.
More protests are planned around this issue in different cities in Poland.
Posted by Akai at 13:56