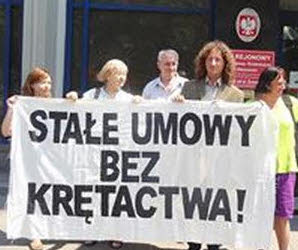 On June 21 the case against Roche Polska continued. Our fellow worker is fighting against the corporate giant and their big gun lawyers to get his employment status recognized. The company had used outside entrepeneurs as a way of getting labor without having to give them any benefits employees are entitled to, such as paid vacation or sick leave and to avoid any responsibility; such workers are easily disposed of without the normal procedures.

At this hearing, witnesses from Roche middle management came and held the company line. One "did not recall" any daily meetings which such workers say they were required to be at in the company. The company claims that the so-called "non-employed workers" did not have to even come into work if they didn't want and in their lawsuit claim they have no idea why the fellow worker came in from 9-5 every day. But the answer is the contract given by Roche to the outside agent requiring that the worker come at these hours. A second witness gave testimony to the workers' conditions for the time he was a so-called "non-employed" worker, but as our colleague pointed out, he had never even met her in that period. So he wondered how she could speak about his specific conditions.

Observers of the case assessed that the managers' testimony was pretty much as expected and note the contradictions between what the workers claim and said in court and the line of the firm.

During the IWA Days of Action against Dismissals and Unemployment, we also wanted to remind people of this case and dismissals in this company. But not only. Such precarious workers, which are not directly employed by the company can be dismissed much more easily and we need to draw more attention to this fact and what such contracting and use of outsourcing really means. Thousands of workers are dismissed every year as companies try to end their employment relations and get "non-employed" workers.

We also will take the occasion of this case to point out the incredible problems that workers have with the courts in Poland. After hearing two witnesses on June 21, the court set the next hearing for December. So in practice, hearings are being held every six months and the case has been going on a year and a half already. In this way, any worker seeking legal remedy can be forced to wait a couple of years for a decision and longer to seek additional monetary compensation. At the same time, if a worker is seeking reinstatement, s/he is entitled usually to just 3 months' salary for the time out of work, in the case of a positive decision. But the legal process takes much longer.

The reason for this is the underfunding of the court system and the result is that few workers actually take their cases to court. Especially against the rich and powerful who can afford many hours of legal counsel.
For this reason also we point out to workers that their best defense is often not legal, but direct action, as the courts simply cannot be counted to on deal with cases in any reasonable time-frame. But for this, much more workers' self-organization is necessary.

We thank everybody who has offered their moral support in this case! We will try all we can so inform working people about the problems of this type of "employment through non-employment" and to influence public opinion on this topic.
Posted by Akai at 15:27