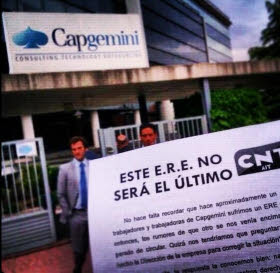 As the result of the call by the Telecommunications and IT Services section of the CNT-AIT Madrid for a Day of Solidarity with the CNT-affiliated members and the workers of Capgemini, several trade unions and European sections of the IWA organized different actions to stop the redundancy plan that the management of this company presented against 370 workers.

This Day of Solidarity was called as part of the 24h strike that the subsidized unions organized as part of a program that will conclude, if Capgemini does not withdraw the redunancy plan, in an indefinite strike starting the 23rd of May.

The CNT members of this company participated in this 24h strike, as well as in yesterday´s partial strikes, but taking a critical position with the Legal Representation of the Workers (CC.OO, U.G.T. and CIS-F), whose agreements with the company´s management tolerated a previous redunancy plan the past year and the smaller scale firings that have been happening in 2012 and 2013.

In Madrid, SOV members established an informational picket at the company´s facilities in Alcobendas, giving out leaflets and informing the high number of strikebreakers that went to work. In the rain, the action did not have any incidents, starting at 8.00 a.m. and with the presence of the subsidized trade unions members. The SOV Madrid finished this action not feeling satisfied because of the large number of strikebreakers that are not just working against our interests but, also, against theirs.

In Barcelona, the SOV joined this day, giving out leaflets in the company´s buildings in Avenida Diagonal and calling on workers to join not only this 24h strike but any upcoming struggle. There they found another picket, without subsidized unions, that finished thanking the CNT members for solidarity.

From the Slovak section of the IWA, Priama Akcia sent a large number of emails to the company´s headquarters in Paris, Bratislava and Madrid, showing the unacceptability of the firings and the precarization that the Spanish subsidy is carrying out and to position itself against the trash contracts that this multinational is using.

The Polish comrades of ZSP gave out solidarity leaflets in the company´s headquarters in Warsaw collaborating with the actions in Spain but also showing the poor conditions of the workers in Poland. This country, and Slovakia, is receiving the jobs lost in Spain because there the labour is even cheaper, in a clear strategy of the management to cheapen and precarize the labor.

In Paris, SIPN joined the actions meeting in front of the global Capgemini headquarters. There the comrades picketed for an hour, giving out leaflets against the redunancy plan and noting the policies of the firm.
We want to close this account noting that the efforts of the CNT-AIT have been directed solely againt the redundancy plan, to pressure the management of Capgemini to stop this road which they began more than a year ago, in which the standard is insecurity. In this regard, we demand that CCOO, U.G.T. and CSI-F do not use our strength and international solidarity to "make" this ERE or "correct" some of the
clauses. The aim of the CNT-AIT is stopping and removing this plan, without mincing words, no agreements behind the scenes, behind closed doors.

We would like to express our sincere and warm gratitude to the comrades that have collaborated in the action, SOV Madrid, SOV Barcelona, the IT section of ZSP Warsaw, Priama Akcia Bratislava and SIPN Paris. We could not have developed this action without their collaboration.

NO MORE FIRING IN CAPGEMINI, FOR THE WITHDRAWAL OF THE E.R.E. *
TELECOMMUNICATIONS AND IT SERVICES SECTION OF CNT-AIT, MADRID

(*E.R.E stands for Expediente de Regulación de Empleo. It is the conventional
term to designate group dismissals in a company.)
Posted by Akai at 08:51