Protests in support of ZSP-IWA by ASF 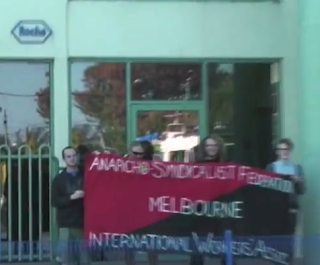 The comrades in Brisbane wrote an open protest letter and in Melbourne they visited Roche offices.

The manager was confronted and a letter of protest was handed to the manager directly.
Long live the IWA and anarchosyndicalism!

ASF Brisbane has delivered an open letter to Roche Pharmaceuticals in West End, Brisbane in support of our comrades struggle in Poland.

OPEN LETTER TO ROCHE PHARMACEUTICALS
We, the Anarcho-Syndicalist Federation (ASF) protest against the labour relations practises of Roche Pharmaceuticals where workers currently employed at Roche in Poland are being forced onto short-term contracts and workers attempting organise their fellow workers at Roche are being sacked.
In particular we refer to our comrade Jakub of the Zwiazek Syndykalistow Polski (ZSP) the Polish section of the International Workers Association (IWA). We demand the reinstatement of our comrade on a regular contract and payment of benefits to all the fake independent contractors.

Roche is using various forms of external contracting to get workers to whom they do not have to pay benefits to. They are not provided by temporary agencies (which, although offering precarious work are at least regulated by the law) but by private “firms” or fake businesses which just bill Roche so that these employees are not on their books. By doing this, Roche does not have to give them the same notice of termination or severance pay, does not offer paid holidays or sick leave, maternity or paternity payments and does not even pay their social security contributions.

We demand the immediate reinstatement of workers at Roche in Poland who having been sacked for union activity.

The ASF retains the right to further protests directed at Roche Pharmaceuticals including boycott campaigns.


Secretary, Brisbane affiliate of the ASF.