Demonstration against Privatization of School Cafeterias 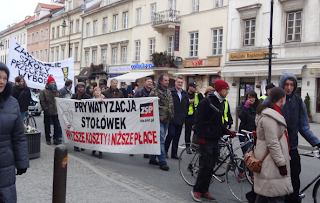 On April 3 we demonstrated against the privatization of  school cafeterias in Warsaw.  The city has decided to privatize some school cafeterias and outsource the work to catering companies. This means that 186 people, mostly women over 50, will lost their jobs. And the catering companies offr shit jobs and high prices for their services that parents will have to pay for. At the same time that the city argues that it needs to cut costs, it is spending 8 times more money than it costs to run all the schools cafeterias in the center of Warsaw to build some special (and useless) zone for football fans in the center of the city for the Euro 2012. 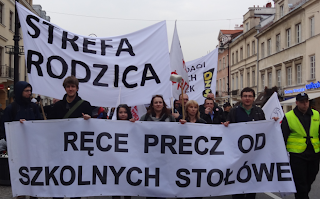 Both parents and cooks participated in the demo. The cooks talked about how the catering companies offer jobs on trash contracts and in the areas where the jobs are done by outside service providers, there is an extremely high turnover. They suppose that the workers are used a short time on temp contracts and changed. One cook complained that she has been working over 30 years and now is at risk of losing her job. She is over 50 and noted that it is very hard for women like her to find other work. Parents complained on the other hand about increased costs and the increased likelihood that the private companies would try to save a lot of money by serving smaller portions, serving leftovers or using worse ingredients in the food.


Both groups complained that the city spends money on stadiums, fountains and bonuses for bureaucrats while cutting costs on education and the needs of children, passing on the expenses to working people.

We marched with the Educational Accord and Democratic Students Association and various other
groups came to lend their support. 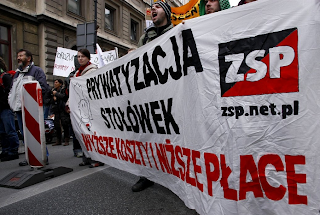 ZSP has also propagated the idea of the possible collectivization of these school kitchens, which normally employ 3-4 people and could be self-managed. Some parents and cooks like this idea and we will see if they decide to pursue it. We offered support if any workplace decides on this, with a view to not working as a capitalist business, but as a real collective.