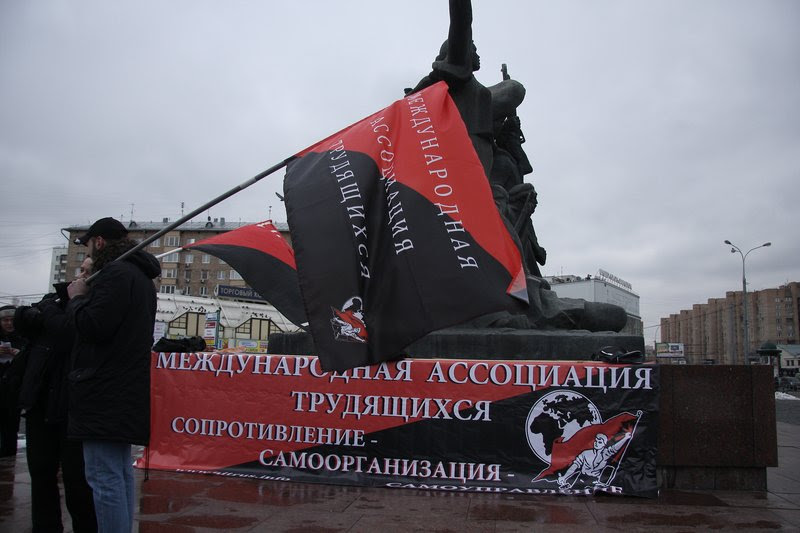 On March 31, a rally-picket was held in Moscow as part of global protest days against anti-social policies and austerity measures at the call of the International Association of Workers (IWA). The action was organized by the section of the IWA in Russia (KRAS-IWA). It was attended by a total of about 40 people: representatives of various social organizations (KRAS-IWA, Autonomous Action, Committee of 19 January, trade union "Teacher", civil initiatives, etc.). The rally was held on the square “Krasnopresnenskaya zastava” with the monument to the heroes of the revolution of 1905-1907. Dozens of passing people stopped to listen to the speakers. The newspaper "Direct action" of the Russian section of IWA was distributed. The action covered by the public television network (SOTV.RF).
Opening the meeting, the representatives of the organizing committee stressed that this action is a part of international action, which began on March 29 with a general strike in Spain against the new labor law: the strike organized by the CNT-AIT (Spanish section of the IWA). The comrades of the section of the IWA in Russia talked about the difficult social situation of workers in Russia (low wages, pension reform plans, lack of rights of employees in the workplace, harassment of independent trade unions, layoffs of protesters and malcontents, strikebreaking, destruction of public education and medicine through the Law 83, etc.). An activist of the independent trade union "Teacher" spoke about the problems of education and the fact that Russian law severely limits the right to strike. He called for an active struggle for social rights of workers, expressing the hope that this action will be only the beginning. Another comrade friend spoke in detail about the problems of housing, about corruption and abuse in housing and communal services and the upcoming regular tariff increases. The teacher of one of Moscow universities said that workers don`t care about which political party or clique in power: all parties are in favor of the same social policy in the interests of the powerful, businessmen, bankers and policymakers. Sociologist Alexander Bikbov spoke about new law, enacting the "ban on the profession" for critical minded people in the field of teaching. He noted that absolutely everything and even the members of this meeting can be labeled as the "extremists" in Russia. Another friend of the Russian section of the IWA talked about the pressure on activists of independent trade unions, in particular, on the employee "Euroset" in Ufa Karen Kudashev who was illegally fired in connection of fabricated cause. He calls for a boycott of "Euroset".

The last of the speakers conveyed greetings to the striking workers of automotive industry in Kaluga, to the participants of the general strike in Spain and to struggling workers in Greece. He read the final resolution and announced that this event is only the beginning, and that the organizers are willing to tie contacts with all the independent initiatives to further public awareness and fight for the proposed requirements. At the end of the action, the revolutionary song "Varshavyanka” was sung.

The picket-rally was held without incidents.
Posted by Akai at 09:18