Solidarity with the General Strike in Spain 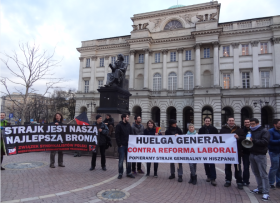 Members of ZSP and some Spanish students protested in solidarity with the general strike in Spain. The ZSP called on local people also to make a general strike, including a worldwide general strike against capitalism. Chants were made in Polish and Spanish and drew a lot of attention from passersby.


Earlier in the day, the ZSP had also visited a protest against raising pension reforms. We raised the banner about a general strike and many rank and file workers came to talk and take photos with us. Even though these people are in a union which does not like the idea of general strikes (Solidarity), many of the rank and file members think differently than the union bosses and were quite interested also in learning about the strike in Spain. They send their solidarity to the strikers. Oddly enough, when visiting the Spanish embassy, we also received support from a couple of the embassy workers.

Unfortunately we were a little sabotaged by rain, but never mind. When we see the strike action that our comrades are making, our moods were very sunny.