Informational Picket in the El Altet Airport in Alicante 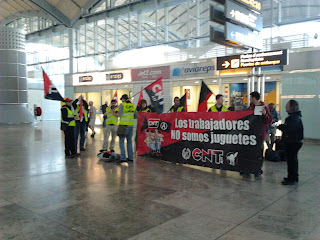 On March 18, the comrades from the CNT unions from Elche and Alicante protested in the airport as part of the action of the "Ryanair Don't Care" campaign initiated by John Foley when his daughter was fired as a flight attendant during the trip and abandoned abroad without a cent. This is a campaign which the comrades from the Solidarity Federation and, by extension, the IWA has supported. John has been detained 6 times  for his direct action activism, denouncing the abuses committed by this company and its cynical working conditions.


From the early hours of the morning a group of militants from both unions were in the airport terminal giving out leaflets in Spanish and English, informing the passengers that were there and some of the workersm who came to tell us about their cases and show their solidarity with this campaign,

After about an hour and and half, having given out of the leaflets, we finished this action, showing that solidarity and mutual aid between workers know no borders.