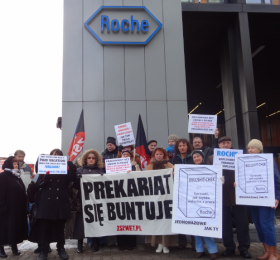 On January 20 a picket was held at Roche headquarters in Warsaw concerning the dismissal of our colleague and the situation regarding employment practices in the firm in general.

Short-term work, fictitious self-employment and general precarity despite the huge wealth of the multinational. The firm would like to have workers who are "not workers" - who can be gotten rid of at any time, without any compensation or any reason. The fictitious self-employed also do not get benefits such as paid vacation, maternity leave and even do not have their social security paid. Our colleague is fighting to be reinstated to work and claims that his lack of employment status was a fiction.

The protest gathered interest from workers in the firm and nearby offices who received a "Bullshit-Chek" strip with information to test how quick they could lose their jobs. People shouted "You fired Jakub, that's why you'll have trouble", and "Trash contracts await you... how's your mortgage?". (It rhymes nicely in Polish.)

Finally, the head of Roche Poland came out to talk to Jakub and listen to his demands, along with the "workers' representative". The latter is what many companies in Poland have instead of unions; sometimes they are appointed by the company instead of the workers and most people don't know they exist. There was no comment on the part of the firm related to the problem of the fictious self-employment. So the campaign for the reinstatement of our colleague has just begun.