All power to the sparks! 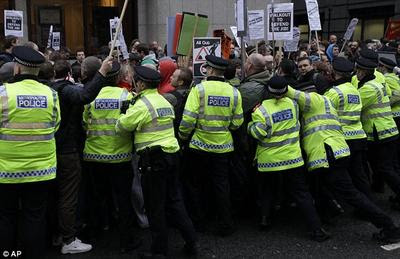 The electricians had called a national day of action for the same day as the student protest of November 9th, which looked like it could have a lot of possibilities. Would these two very different movements be able to link up?  We gathered outside the Pinnacle site in Bishopsgate, with hundreds of bleary eyed sparks who had travelled down on buses from as far as Liverpool and Tyneside.  When we had enough numbers we surged into the road and blocked Bishopsgate. The police pushed us back and tried to drag a couple of people out of the crowd but everyone clung on to them and no-one was arrested. We blocked the road for quite a while, then suddenly we were on the move and we marched through the City. The police tried several times to block us but the sparks were determined they were having their day of action and we pushed through them. We moved fast to site after site owned by the “Big 7” construction companies who are pulling out of the JIB agreement. It was an eye-opener to see just how much building there is going on in central London. We briefly occupied Cannon Street Station and paid a repeat visit to the Gratts site in Cannon Street, where the site manager said two weeks ago that if it was up to him he would pay the workers £1 an hour.  We went to the occupation at St Paul’s for some speeches on the steps and then carried on to Farringdon, where we had briefly occupied the site a few weeks ago. We crossed the river by Blackfriars Bridge and then marched to the Shard, where we waited for the official Unite march to form. Most of our solfed contingent then headed off to meet the student demo, but we were soon joined by a good number of reinforcements from the south, with a dangerously unstable banner which almost took my eye out more than once.  Some solfed students had prepared a leaflet calling for common cause between students and sparks and inviting the sparks to come to the student demo, which was handed out and well received by a lot of workers, who said they definitely wanted to come.
Unite had wanted to march to Westminster to lobby MPs, but the rank and file insisted that if people had travelled all night to be here and we had the numbers in London, we had to put this to good use and try to close down a site.  They wanted to go to Blackfriars, where union activists have been blacklisted.  While we were waiting for the march to start, the rank and file activists, who had actually put all the effort in for months to build the whole struggle against the new BESNA terms, were making speeches using a little battery powered microphone, which ran out of power. They said they couldn’t use the big sound system Unite had set up because McClusky was late and no-one could use the sound system to speak before he did. People started to shout “Let the rank and file speak!” but all we got was a succession of dismal speeches by Unite officials.  We finally headed off, dragging people out of the pub with some difficulty, and crossed back over the river heading for the site. The energy was much lower than in the morning as everyone was getting very tired, having been on the go for six hours. When we got to the Blackfriars site the gates were barred and there was a strong police cordon to make sure we could not get on to the site. We stood around for a bit listening to even more speeches and then our solfed contingent decided to go on to the student demo. We went around asking people if they wanted to move off but mostly people wanted to stay at Blackfriars for a bit so we headed off, trailed by a couple of police.
It was a bit uncanny walking through streets with no traffic, lots of police and spectators standing around waiting for “something to happen”. We reached the head of the demo, which had a massive intimidating police block marching in front of it, including horses. We slipped in and found our comrades and marched on up the Strand. After a while the march stopped and we were trying to find out why when someone called out that the sparks were trying to join us and were being prevented from doing so and were kettled.  The demo refused to move on and people started to chant “Free the sparks!” People stayed put for quite a while until the police started saying they would arrest us for unlawful assembly and started intimidating individual people, going up to them and saying “I’m going to arrest you first.” Eventually we moved on up to Moorgate, where the police didn’t allow the demo to continue and started to surround it, at which point we called it a day.
It did feel encouraging that the sparks had wanted to come and join the student demo and the fact that the police were so determined to prevent them shows that they see that as dangerous. The electricians will probably take some form of action on November 30th, to link up with the strikes, and then the next big mobilisation will hopefully be on 7th December, when the employers are going to try to enforce the new contracts. Unite are supposed to be balloting for strike action on that day and hopefully we can build on the connections we have made with the rank and file to help spread the struggle.