Real Revolution Now: How the Outraged Met the Indignant and how the Liberals gave up Non-Violence 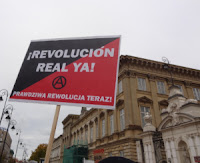 On Oct. 15, a protest was  held in Warsaw in answer to the call by the "indignant" to have protests all over Europe. The ZSP of course is happy when there are social protests here since the general mood of apathy and resignation is intolerable.
We know some of the young people who organized the protest and were quite happy today when one of the organizers came to the microphone where we were talking and seconded our criticism of politicians, saying that parties were not welcome to promote themselves there. On the other hand, there was some criticisms of some of the postulates of the Polish indignants related to things like funding political parties even if they do not cross a certain percent, which they felt would ensure more political pluralism. Certainly these things are worth debating and we invited people to such a debate next week.

One problematic issue for us became the involvement of the liberal elites from Krytyka Polityczna or the mainstream press which try to channel young people into a soft opposition which acts like a political elite in social dialogue with the neoliberal establishment. Recently we picketed the bar of Krytyka Polityczna about trash contracts that barstaff had there and the whole issue became quite loud, especially after one of them was ardently defending such working conditions as "normal" and the main newspaper in Poland called this ideology "right of Margaret Thatcher". Since the march of the "Polish indignants" was supposed to go past that bar, we decided we'd also make a picket there. 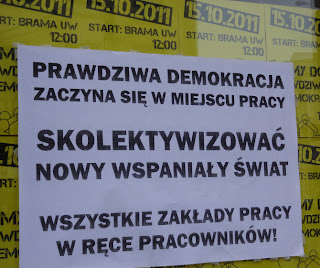 The march of the "indignants" started. Organized under the slogan "real democracy now", and "we are indignant" and using references to "the Spanish revolution" (in respect of the M15 movement) we brought the slogans "real revolution now" and "we are really pissed off". (In Polish the word is a little harder, but difficult to translate.) We thought we might take the opportunity to remind people of some of the postulates of the real Spanish Revolution, which included the collectivization of workplaces. So we hung a sign on the bar of Krytyka saying that "real democracy begins in the workplace, all workplaces in the hands of the workers" and calling for the collectivization of the bar. 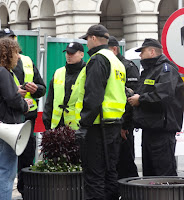 The people from Krytyka came quite quickly to rip that down and call for help. They were particularly aggressive. Quite soon we had some problems with the police, but of course we still have a few democratic rights in Poland and can picket legally. One person was trying to get the police to do something because somebody put a sticker on the bar. Due to the presence of our modest picket, the march of the indignant was rerouted to a side street, so that the people didn't see this picket.

Quite an interesting scene occurred with several members of Krytyka Polityczna. The financial director flipped out and they were trying to take our banner and signs. Eventually the financial director took one of the signs from somebody and started to beat our colleague on the head with it, even though he is probably the least aggressive person we know, was standing absolutely calmly. 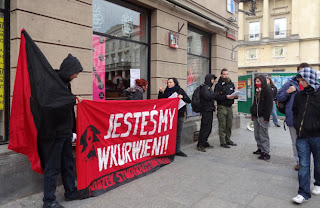 One reason this was so interesting is that many people from that scene are dogmatically non-violent. At a conference held at that bar last year, there was much condemnation of anarchist antifascists who used "hate speech" against fascists marching on Nov. 11. (This referred to the fact somebody played a Chumbawamba song saying "give the fascist man a gunshot". There were also complaints about the anti-capitalist leaflets of ZSP.) Since this time, this liberal scene really pushes this non-violence stuff. Today's demo also was organized using "non-violent principles". Well, we are not really upset to see that people are ready to use violence and aggression but it is quite interesting that they could manifest such aggression to somebody standing peacefully holding a sign reading "enough trash contracts". It is sick that, when they invite horrendous neoliberal politicians to their place, they sit there politely listening to their crap when they certainly deserve that sort of reaction. But certainly that wouldn't be polite and probably if anybody acted the way that they acted to us in their bourgeois liberal salon, they would quickly be escorted out the door, perhaps by the police.

Also we could see that, although one of the most famous Polish feminists took part in confronting us, threatening to sue us and calling one comrade an "agent", unfortunately there is a problem with sexism since they would not let a female comrade talk or answer her questions, insisting only to speak to a man.

After the march of the indignants and the incident with the liberals, we are still a little more than indignant and we will continue to attempt in inform people like the young people at the march about workers' rights and issues such as trash contracts and work precarity which they are very likely to encounter for years to come.