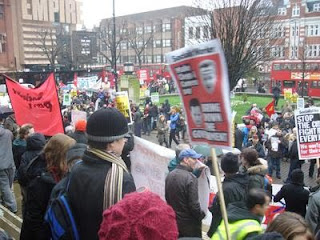 Around 500 people turned out in the rain yesterday to show their dislike of Hackney Council's proposed service losses, as it struggles with some of the heaviest austerity cuts to its budget of any local authority in Britain.
North London Solfed members joined the rally, which was organised by Hackney Alliance Against Cuts, as it marched from Stoke Newington on a two hour route through to the centre of the borough to highlight the potential impact of a 8.9 per cent drop in funding.

Council estimates suggest around 800 jobs would go on the back of the losses, which would drain money and jobs out of some of the most impoverished areas of the country.

The march represented a significant rise on the numbers seen late last year - around 200 people demonstrated on the town hall steps in October when the scale of government withdrawal of funds from the borough first became clear.
Posted by Unknown at 14:25